A Peek Into The Strangest Customs Followed Around The World With Eastern Travels! 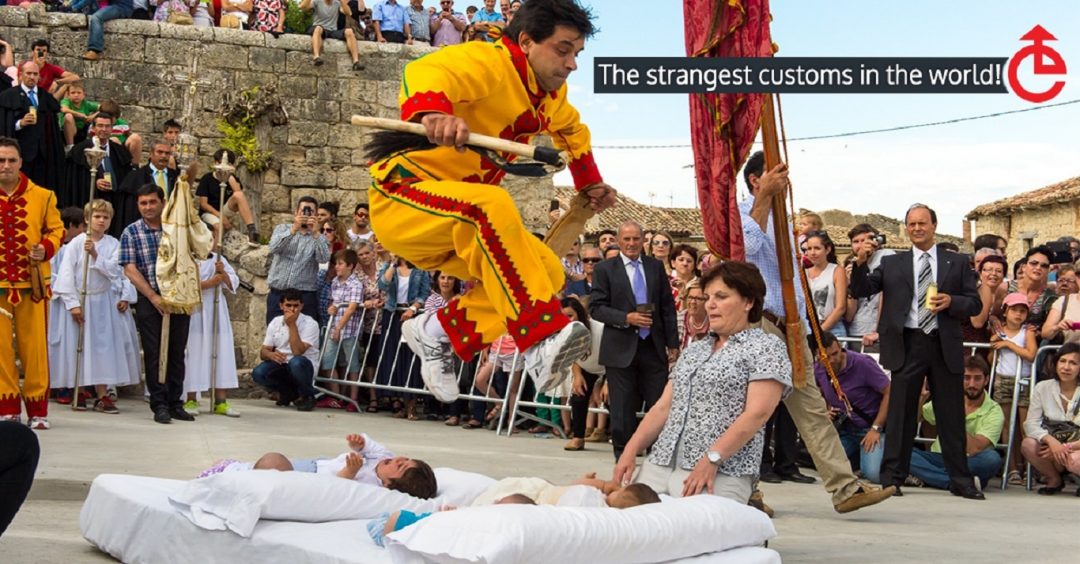 We live in a beautiful and diverse world filled with people who have their own beliefs and customs. All over the world people follow rituals as part of their religion and culture to mark life’s many milestones. What may seem strange to an outsider is actually a celebration and way of life to the people following the custom.

Here’s a list that includes the world’s most interesting and unique customs. Read on with an open mind and a sense of adventure for a glimpse into the peculiar customs followed around the world.

1. Teeth Tossing, Greece –
In Greece, the children follow a unique tooth custom. They toss their fallen milk teeth on their roof top for good luck and make a wish for healthy and strong teeth as adults.

2. Don’t ask for salt, Egypt –
Food etiquette is important to follow when travelling abroad. In Egypt, when invited to dinner, it is considered rude and insulting, if you add salt to your meal. It’s insulting to the host and suggests the meal is not good to taste.

3. Monkey Buffet Festival, Thailand –
Monkeys are believed to bring good fortune. Each year in Thailand, the monkeys are celebrated with stacked servings of food and drink brought by locals and tourists. There’s music and the young people dress as monkeys to give their thanks to these naughty and lucky animals.

4. Saluting Magpies, UK –
In UK, single magpies are considered an omen of bad fortune. As magpies mate for life, a single magpie means it has lost its partner. Saluting a magpie is a symbol of respect and is done with the hope of not having any misfortune passed on to you.
Single magpies are usually greeted with, “Good Day Mr. Magpie. How is your lady wife today?” Asking after its wife is suggesting the magpie has its mate and hence is happy.

5. Arrive late, Venezuela –
In Venezuela, it is considered rude to arrive on time. It is recommended to arrive at least 15 minutes after the scheduled time to avoid looking too eager and greedy.

6. Baby Jumping, Spain –
A traditional annual festival, that dates back to 1620, in which grown men dressed as devils in red and yellow suits jump over babies born in the last 12 months. The men run along the streets and jump over babies that are laid down on mattresses in front of worried parents and visitors. This festival is called El Colacho and is said to cleanse the babies of all sins and ward of illness and bad fortune.

7. Groundhog Day, Pennsylvania –
An annual holiday that is celebrated to determine the weather forecast by a groundhog. As per the legend, if the groundhog sees his shadow when he emerges from his burrow, winter will continue for another 6 weeks, and if not then spring will arrive early. This holiday has been practiced since 1887 and is celebrated in Punxsutawney, Pennsylvania, with groundhog Punxsutawney Phil.

8. Black Friday, United States –
Black Friday marks the beginning of Christmas shopping in the US since 1932. It is an unofficial holiday that is celebrated each year after Thanksgiving Day when all major retailers offer promotional sales and discounts. Stores open as early as 4.00am and close after midnight making Black Friday the busiest shopping day each year.

9. Blackening, Scotland –
A wedding ritual that involves the bride being blackened by putting every imaginable nasty substance on her a few days or weeks before her wedding after which she is tied to a tree and then taken drinking. The belief behind this ceremony is that if the bride can survive all this humiliation she can handle anything in her marriage.

10. St. Catherine’s Day, France –
A holiday that commemorates the martyrdom of Saint Catherine of Alexandria, one of the Fourteen Holy Helpers is celebrated in a fun and unique way in France. On this day, unmarried women pray for husbands and the women who have reached the age of 25 are honored and celebrated by wearing hats made in yellow and green all day. A pilgrimage is made to the statue of Saint Catherine and there are parades by French milliners that showcase different and exotic hats and headgears along the way.

11. Fingerhakeln, Austria –
Fingerhakeln or finger pulling is an old athletic sport practiced in Austria and Bavaria. Finger pulling is taken very seriously and there are a number of tournaments held each year. Two contestants sit on opposite sides of a large table and lock their fingers through a leather strap. Once the referee gives the signal, each contestant uses all his strength to pull the other across the table using only a finger.

12. Wife carrying, Finland –
A fun annual contest held in Sonkajärvi, Finland since 1992 where a male participant carries a female teammate through an obstacle course. The prize includes beer that is equivalent to the weight of the winning female participant. There are special prizes for the most entertaining couple, best costumes and also the strongest carrier.

Contact us for planning and booking your next holiday and experiencing some of these unique customs for yourself.

World Famous Desserts You Must Try! →